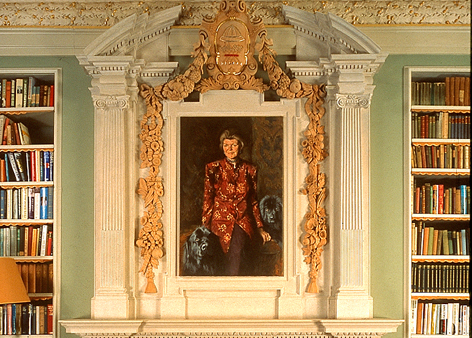 View More Images of This Project

Cranborne Manor in Dorset, the home of Lord and Lady Cranborne, has grown over the centuries around a Royal Hunting Lodge, built probably for King John in the early 12th Century. Much of the rest of the house is of the 16th Century, the West wing, housing the Library, of the early 17th Century.

As a way of marking the millennium, Lord and Lady Cranborne undertook the complete redecoration of the Library, including a new fireplace, the design celebrating the natural history of the locality. The new mantle piece is carved from Portland Stone and Purbeck Marble, the overmantle from limewood. The decorative swags are made of the wild flowers and plants of Cranborne Chase and hide a number of small animals and birds.

The fireplace and overmantle were designed in collaboration with the carver Dick Reid who also executed the new door surrounds that carry the double 'MM' of the millennium.

Julian Bicknell & Associates is a London based architectural practice of thirty years standing, specialising in quality buildings, interiors and landscapes - mainly in classical or traditional style. The practice has worked for private clients and developers all over the UK and in Japan, Russia, the USA, Morocco, Germany and Kazakhstan. The work includes spacious country houses, luxury homes on the prestige estates at Wentworth and St. Georges Hill, museums, restaurants, theatres, schools, a golf club and modifications to important historic buildings. The design philosophy combines a deep sympathy for traditional design and building methods, with a full understanding of energy strategies and construction management. The practice works closely with other professionals and experienced craftsmen to achieve low-energy buildings of real quality within predetermined budgets.